Driven by the explosion of a massive star, supernova remnant Puppis A is blasting into the surrounding interstellar medium about 7,000 light-years away. At that distance, this colorful telescopic field based on broadband and narrowband optical image data is about 60 light-years across. As the supernova remnant expands into its clumpy, non-uniform surroundings, shocked filaments of oxygen atoms glow in green-blue hues. Hydrogen and nitrogen are in red. Light from the initial supernova itself, triggered by the collapse of the massive star’s core, would have reached Earth about 3,700 years ago. The Puppis A remnant is actually seen through outlying emission from the closer but more ancient Vela supernova remnant, near the crowded plane of our Milky Way galaxy. Still glowing across the electromagnetic spectrum Puppis A remains one of the brightest sources in the X-ray sky. via NASA http://ift.tt/1LF7ZfT
Posted in apod, Repost, Space | Tagged IFTTT, NASA, OSD | Leave a comment

The Large Cloud of Magellan The 16th century Portuguese navigator Ferdinand Magellan and his crew had plenty of time to study the southern sky during the first circumnavigation of planet Earth. As a result, two fuzzy cloud-like objects easily visible to southern hemisphere skygazers are known as the Clouds of Magellan, now understood to be satellite galaxies of our much larger, spiral Milky Way galaxy. About 160,000 light-years distant in the constellation Dorado, the Large Magellanic Cloud (LMC) is seen here in a remarkably deep, colorful, image. Spanning about 15,000 light-years or so, it is the most massive of the Milky Way’s satellite galaxies and is the home of the closest supernova in modern times, SN 1987A. The prominent patch below center is 30 Doradus, also known as the magnificent Tarantula Nebula, is a giant star-forming region about 1,000 light-years across. via NASA http://ift.tt/1KP4xcI
Posted in apod, Repost, Space | Tagged IFTTT, NASA, OSD | Leave a comment Is this coat hanger a star cluster or an asterism? This cosmic hang-up has been debated over much of last century, as astronomers wondered whether this binocular-visible object is really a physically associated open cluster or a chance projection. Chance star projections are known as asterisms, an example of which is the popular Big Dipper. Recent precise measurements from different vantage points in the Earth’s orbit around the Sun have uncovered discrepant angular shifts indicating that the Coat Hanger is better described as an asterism. Known more formally as Collinder 399, this bright stellar grouping is wider than the full moon and lies in the constellation of the Fox (Vulpecula). via NASA http://ift.tt/1EhBBgC
Posted in apod, Repost, Space | Tagged IFTTT, NASA, OSD | Leave a comment Despite appearances, the sky is not falling. Two weeks ago, however, tiny bits of comet dust were. Featured here is the Perseids meteor shower as captured over Mt. Rainier, Washington, USA. The image was created from a two-hour time lapse video, snaring over 20 meteors, including one that brightened dramatically on the image left. Although each meteor train typically lasts less than a second, the camera was able to capture their color progressions as they disintegrated in the Earth’s atmosphere. Here an initial green tint may be indicative of small amounts of glowing magnesium atoms that were knocked off the meteor by atoms in the Earth’s atmosphere. To cap things off, the central band of our Milky Way Galaxy was simultaneously photographed rising straight up behind the snow-covered peak of Mt. Rainier. Another good meteor shower is expected in mid-November when debris from a different comet intersects Earth as the Leonids. via NASA http://ift.tt/1Efg08x
Posted in apod, Repost, Space | Tagged IFTTT, NASA, OSD | Leave a comment

And now a message from the TSU administrator about Propaganda

I hope all of you had an enjoyable Play Day on this past First of March (and a similarly silly fourth of may for all you Star Wars fans out there).

Play Days are held every spring and fall (the other one coincides with the American holiday of “Labor Day” in September), and are a day which is less about the Toy Soldiers as a whole, and more about the individual mission to make Fun the Top Priority. Soldiers, recruits, and even random strangers are encouraged to take place in tactical playtime first, and ask questions later.

Join our bearded administrator on an exploration of our electronic friends: Robots!

Have you hugged your robot today? 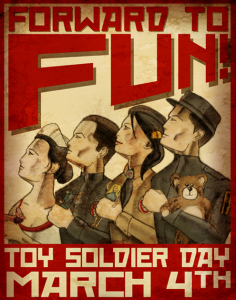 Today is the closest we have to a national holiday in the Army of Toy Soldiers. Like Star Wars Day or Pi (or Tau) Day, ours is a pun on the date, but is also our call to action. March Fourth, Toy Soldiers!

But what do you do to celebrate Toy Soldier Day? Why, anything that actively spreads fun!

Bake cupcakes for your co-workers!
Do a dance routine in the park!
Protest the lack of recess at your university!
Host a party for all your friends!
Invade a theme-park in uniform with your local division!
Go watch a fun movie with your room-mates (I suggest something with giant robots in it!)
Travel cross-country to invade another division’s invasion!

But most of all, make Fun the Top Priority, because after all, Utopia Comes with Toys! When it’s all said and done, please share your adventures on TSU, in the Division Thread.

A couple of months ago, I accidentally the database behind the Seventh Regiment’s website.  The Whole Thing.

So, we’re back!  I’ll go back and try and rebuild the old posts, but the one thing I learned is that you make backups regularly, THEN delete stuff you think you’re not using.  That way, when you find out you’ve deleted something you need, you can get it back.

Met up with Gonzo, Delina, and Airhead at the Hostel on Thursday night. Had a couple of drinks in the bar, but as I had been out to York all day, I was quite a bit beat. The hostel pub was “American” themed, with whiskey drinks served in mason jars, a bust of the Blues Brothers, and a menu consisting of hamburgers, chicken wings, nachos, and colesaw. It was also popular with the nearby businessmen out drinking with their office buddies and their disappointed girlfriends. But one thing, the music is loud, and we were all tired…so we all retired.

When Friday rolled around, Gonzo, Airhead and I embarked across London Bridge to catch the DLR to meet up with Iron Friday morning to schlepp things from his car at Expo back to the Hostel. Turns out that we needn’t make that trip, as you can catch the Jubilee line from London Bridge, rather trying to find the DLR inside Bank.

Once we returned from our sojourn, it was by absolute luck that the Toy Soldiers were assigned the same hostel room as I had vacated been in for Thursday and Wednesday nights. Throughout the day on Friday, soldiers arrived at the hostel to check in: Chrysalice, Hamster, Kracken, Mayo, Grimm, Mikey, Kipling, Charlotte, Elfeva, JDUK, Straitsilver, Sophie, SilentAddle & BE4R.

Had a loud evening at the hostel pub, and a bit of a surprise when two unaffiliated guys randomly got assigned to our room. Both they and us were quite confused when they arrived, as there were no beds available for them and we had rented out the whole room anyway. However, they left quickly enough and were given rooms somewhere else in the building.

It was on Saturday that I first discovered how akin to hobbits the Toy Soldiers are. We sat downstairs in the pub, eating our free (cold) breakfast and waiting patiently for the cook to arrive so we could order second (hot) breakfast. Many cups of coffee were consumed and it was here I was told that “If the Americans have gotten one thing right, it’s breakfast…” whilst consuming fluffy, thick, and delicious pancakes. (n.b. In Britain, these are ‘Scottish’ pancakes, whereas the normal kind being more like crepes, and flapjacks are a kind of biscuit akin to granola bars).

Fed and dressed, we set out for the convention. Saturday was our first time making the transfer to the DLR en masse at Canning Town, so there was some confusion as to which tracks to catch to the ExCeL… some soldiers caught an express train on the lower track and when they realised they had left us, they got off to wait for the next train. Other soldiers figured we knew what we were doing, and met us there. Saturday was also the first proper day for attendees, and for costuming, with Kracken and Chrysalice dressing as Captain and Mary Marvel, JDUK wearing his flight-helmet, and Hamster dressed as Clint Eastwood’s “Man with No Name”. On the platform for the DLR, we fit right in with all the other cosplayers.

For a time, Geoff got disconnected from the rest of the group (this seems to happen in London on Saturdays…) and wound up occupying a disused booth in the far end of the Expo hall. During the half-hour I spent occupying the booth, he managed to spread propaganda, exhort passersby to have continue having fun, and generally own the booth he was standing in. I was surprised by the number of people who passed a man in a kilt eating an apple and figured ‘oops, best not walk through his booth’ and went around me. Took some photos of good costumes, but failed utterly to properly document the experience. This was apparently during a fantastic hail-storm which caused the attendees to scatter for cover, which may have explained where everyone else was.

When the group returned from the Expo, it was determined we were still hungry, so a detachment was sent out to find food. Due to the late hour, the only thing we found was a Kebab shop (which Geoff was elated about) so we all had Donner and chips out on the pavement like good lads.

Sunday continued the costume fantastic, with Elfeva dressing as Danyeris Targaren, Chrysalice dressing as Elsa, JDUK as Hunter S. Thompson, and Geoff as a Tourist. Iron broke out his Engineering jumpsuit and stilts, and we wandered about seeing the sights in groups of twos and threes.

On Sunday, a harrowing experience occurred while the group was milling about planning on passing through the Artist Alley one more time. One of the con attendees passed out while sitting with a friend… and with no convention porters, staff, or volunteers nearby, we had to summon the emergency services ourselves. Thankfully, with Iron’s enhanced stilts, he was able to cross most of the expo hall quickly to flag down one of the ExCeL staff who eventually radioed out for medical assistance. During the fifteen minutes of confusion, the remaining Toy Soldiers formed a human chain to prevent people from walking over the fallen. Toy Soldiers. Doing Well by Doing Good since 2007!

A group late lunch was had al fresco with nearly £150 of pizzas… but we kept going on drinking and eating and having a wonderful time.

Also on Sunday, we ran into YJ Monte who was running a rummage-sale of sorts in the hall, and had a good long chat with him as it had been two or three years since we last had spoke. A number of soldiers also visited the Island of Doctor Geof, a steampunk illustrator, and joined the First Tea Company (a sort of fan-club-cum-nodding-wink-to-steampunkery)

As a sort of last hurrah, we all adjourned to the hostel up the street and partook in a rump steak dinner on Sunday night. Over good food, good beer, and good cigars we reaffirmed our desire to continue doing this sort of thing, to making fun the top priority.